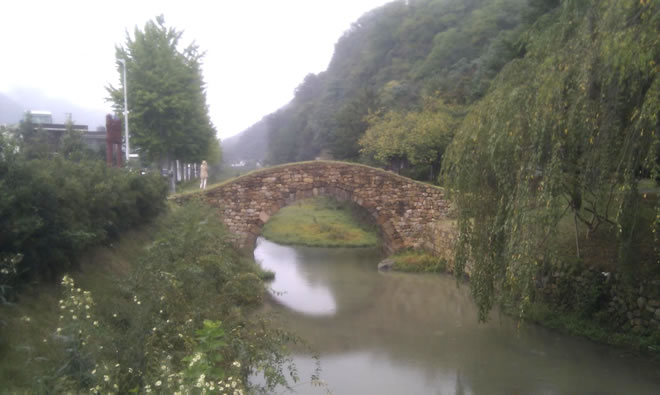 The Charms of Changnyeong County

Located just an hour northwest of Busan, Changnyeong-gun has much to offer besides the Upo Wetlands, on which I wrote about back in 2012. The county’s main claims to historical fame are that a minor victory over the Japanese was scored there in 1592, that it was the cradle of the 3-1 Independence Movement and that it held the last fort during the Battle of the Nakdong River during the Korean War. Bordered on the west and south by the Nakdong River and covering 500 square kilometers, every year this rural expanse produces 67,000 tons of onions, 8,000 kilograms of pine mushrooms, 13,000 tons of sweet persimmons and 11,800 tons of garlic (if you have ever wondered from where Busan gets much of its produce, now you know).

The real reason to visit this county, though, is not to watch crops grow but to see its sites of interest, all framed by fine countryside. In fact, for anyone with a car or a large wad of cash to spend on taxis, Changnyeong offers a wealth of natural and cultural venues for a day trip or weekend getaway. Here are three.

Changnyeong’s leading historic and cultural attraction is Gwallyong-sa, a small Buddhist temple which sits high up the slope of Hwawangsan, the county’s highest peak. A taxi ride there from Changnyeong’s bus terminal costs 18,000 won, plus 1,000 for entry into Hwawangsan County Park, and you will have to get the driver to wait while you visit. Whether you go by taxi or private transport, the drive there leads through enchanting farmland, then up a steep, narrow road that winds through beautiful forest and is bordered by a stream rushing over boulders. At the top of the road is the temple, with the crest of Hwawangsan as a backdrop. Changnyeong’s website carries very basic information about Gwallyong-sa, and the inimitable Dale Quarrington also has an entry for it on his exhaustive website. This humble reporter can do little more than report on its ethereal atmosphere amidst the pines.

Gwallyong-sa is distinctly un-touristy, and is famous as a place of pilgrimage because of its Yaksa Hall, which reportedly was not burned along with the rest of the temple in 1592. Its miraculous survival is attributed to Buddha’s spiritual power, so it is known as a place where wishes are granted. Like Gwallyong-sa’s other buildings, Yaksa Hall is tiny, holding only about ten square meters of space inside walls painted with aquamarine floral patterns below a frieze of Buddhist saints; lotus lanterns hang from the ceiling. Yaksa also holds the temple’s main relic, a Shilla-era seated Buddha which obviously escaped destruction in 1592 as well. This statue certainly looks like other Shilla sculptures I have seen, being very simple, even rather rough-hewn in appearance. Beholding it makes one wonder at how much like modern abstract sculpture many relatively primitive sculptures are. At any rate, a visit to Gwallyong-sa is well worth it just for the drive there; you can easily take in the temple in a few minutes, although its feeling of distance from the everyday may lure you to stay longer.

When you depart the enchanted environs of Gwallyong-sa and return down the mountain to planet Earth, an antique bridge named Mannyeonggyo awaits you in the south-central part of the county. Set in leafy roadside Hoguk Park, Mannyeongyo arches 13.5 meters long and 3 meters wide over a green canal in which it is reflected. Visitors can walk back and forth across it as they explore the park. First built in 1780, it was restored in 1892, and Chinese methods were used in its construction. It certainly looks Chinese, but whether you think it is more Chinese or Korean, there is no doubt you will find it amazingly quaint in a country covered in ugly, utilitarian architecture. Like Gwallyong-sa it is small, but worth the drive to contemplate for some minutes.

If temples and bridges are too man-made for you, then southwest of Mannyeongyo lie two watery natural areas you can visit: Jangcheok Jeosuji (reservoir) and Beongae Neup (wetland). The former has a dirt road running alongside it from which you can view the water. As you drive, be sure to keep your windows rolled up because of the wasps and other insects that thrive on the banks. There is absolutely no information on these places in English, and only a little in Korean, but that makes going to them all the more off-the-beaten-track, and gives you the feeling of having your own secret place to visit. If you can read Korean well enough, check out this site or this one. These areas are part of the Nakdong River watershed, like the better-known Upo Wetlands, but they are much less visited.

The above three sites are enough to make a good day trip out of Busan, and just going to them is worthwhile because of the countryside one sees along the way, which could not provide a better contrast to Busan’s cityscape. Changnyeong is an introduction to another side of Korea.

Korea Destinations: 15 Festivals to Check Out Around The Country in October

Korea Destinations: Five Festivals to Check Out This Weekend