The onset of summer means two thingsâtaking endless photos of cherry blossoms and getting those bods beach-ready. Here are five food ideas that will make ‘diet’ seem like way less of a dirty word.

Two words: Buckwheat Noodles. I was introduced to mae-mil (ë©ë°) by a friend who, for health reasons, needed to go on a gluten-free diet. Buckwheat noodles, also called soba noodles, contain half the calories of white flour pasta and a one cup serving packs 25% of the recommended dose of manganese, a mineral that aids in metabolism. Despite its name, buckwheat is not actually a wheatâit’s ground from the seeds of a plant in the Rhubarb family. Try using buckwheat noodles as a substitute in your favorite pasta dish. They not only have their own, naturally salty flavor, but also take just minutes to cook. 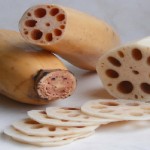 Ever wonder what those discs that look like little wheels served as bancheon are? They’re actually lotus root, or yeon-gun (ì°ê·¼). I recently ate in a Japanese restaurant in Nampo-dong that served crispy lotus root chips as a garnish on the plates. Turns out, they’re not only incredibly tasty, but also contain zero calories from fat and have less carbs than potatoes. Most marts sell pre-sliced lotus root in vacuum sealed packs. Just pop them in the oven with some olive oil, pepper and sea salt on 175C for about 30-40 minutes, or until they are slightly brown (depends on the thickness of the slices) and you’ve got yourself a great side dish or snack.

Another great substitute for the carb-heavy potato is cauliflower. A cup of steamed or boiled cauliflower contains less than 30 calories and less than 1g of fat.  The frozen sections of many marts have started selling bags of frozen cauliflower pretty cheap. Simply steam or boil it until it is soft, drain and then use either a food processor or a potato masher to turn it into a puree. Put the puree into a small sauce pan, whisk in some skim milk, salt, pepper, and some margarine and voila… the perfect stand in for mashed potatoes. Add some dried sage or dill for that little extra je ne sais quoi.

I’m a sucker for cream sauces on my pasta, but I always sufferânot only from guilt but from acid reflux, a pretty common reaction to super rich foods. One night, I was hankering for something creamy to pour over my buckwheat noodles, and I got creative. I blended a cup of plain yogurt with a can of cannellini beans, added the blend to some caramelized onions and capers and I wound up with something akin to Carbonara. The friend I had invited over for dinner was shocked to learn that the sauce didn’t contain a lick of cream, not to mention the increased protein from the beans.

One of my greatest weaknesses when it comes to dieting is my penchant (ie. constant craving) for salty foods like cheese and mayonnaise. It’s hard for me not to want to punch up a grilled chicken breast with some melted cheese or turn hard boiled eggs into a creamy egg salad. My answer to this is a condiment that, until about four years ago, I didn’t know existed. It’s called achar, which is mixed Indian pickles. Not for the faint-hearted, achar, which contains pickled mango, carrot, cucumber, radish, lime, green chili and garlic, is incredibly pungent and spicy as f%@k. Just a teeny bit can add a whole new level of zing to an otherwise bland dish. It’s a fantastic addition to an omelet and also serves as an excellent soup flavoring in lieu of bouillon. Achar is available at every single one of the Asian food marts in Sasang.

Jen Sotham has been eating her way through Busan since 2006. She serves as Haps Culture Editor.

“On the Road Busan” Holding “Christmas in Autumn” Event this Week

Government data showed lottery sales in South Korea hit a 15-year high in the first half of the year amid the economic fallout from the coronavirus pandemic.
Read more
Lifestyle

Sales of alcohol in South Korea are rising as more people are staying home due to increased measures to prevent the spread of coronavirus in the country.
Read more
Lifestyle

The City of Busan has announced that it is hosting the 1st Busan Metropolitan City YouTube Video Contest - BUFLIX until October 19, 2020.
Read more
BIFF

The 25th Busan International Film Festival, previously planned to be held from October 7th to October 16th, will now take place from October 21st to October 30th after the board of directors reached the conclusion to postpone the festival by two weeks and to downsize significantly.
Read more

Busan IPark succumbed to a 2-0 defeat away to reigning champions Jeonbuk Hyundai on Sunday afternoon as their floundering end to the season continued.
Read more