Since its opening in November 2015, A Moon Light Lane Ceska, located on Damaji, has opened every day all-year round, offering homemade dishes with quality ingredients. Months ago, I happened to drop by to talk with friends after having lunch in the area. While we initially chose there to sit on the patio table to enjoy the scenery, I fell in love with their yujacha (Korean citron tea). Something felt uniquely different about how it was served here, so I went two more times to get to know more about this place.

I learned that the owner and his family lived in the U.S. for five years and also went to the Czech Republic to learn to make trdlo.

They make trdlo, a traditional Czech sweet that is wrapped around a spindle and glazed with sugar and walnuts then cooked with the ingredients which are fermented three times over two days. My favorite is the cinnamon for 3,000 won which is accompanied with fresh, handmade whipped cream on the side for dipping.

The coconut chicken curry and onion cream soup were exceptional. Everything I tried was great although their French toast was not exactly what you expect from ‘French toast’.

They have a beer fridge which is self-serve with prices ranging from 4,000 won – 9,000 won and also have a small wine selection at reasonable prices from 25,000 won – 58,000 won. Menu choices if your drinking including french fries, nachos or Caprese salad are offered from 10,800 won to 14,800 won. A homemade, American-style brunch is also on offer.

Overall, their portions are a bit on the small side and as a big-eater, I needed more than one dish to satisfy my hunger.

I heard some celebrities from TV shows or news programs love to go there when they are in Busan. The owner’s aunt can speak simple German, Japanese, and English.

Reservations, free WiFi and take out for beverages and trdlo are available. Parking is free  behind the restaurant in the same building. 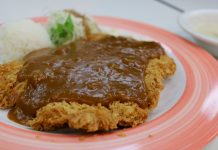 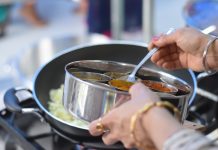