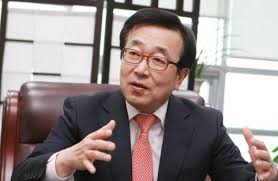 Seo Byung-soo of the Saenuri Party has been elected as the mayor of Busan. The 62-year-old Seo will take over the position of the 6th Busan mayor of the ruling party after current mayor Hur Nam-shik, who has served three consecutive terms.

Seo entered the political world as the head of Haeundae-gu in 2000.

Since then, he has been a four-time lawmaker for 12 years starting in 2002 with Gijang-gam in Haeundae-gu, his local constituency.

The Saenuri Party won 15 among 16 political wards in the election for local government heads of Busan. Only in Gijang-gun, an independent candidate Oh Gyu-seok beat Hong Seong-ryeol, a candidate of the Saenuri Party, and succeeded in keeping the post.

In the Busan municipal election for 42 city councilors, the Saenuri Party swept everything, gathering every seat of the city council from other parties.

In the 22 election districts, new faces have been elected and are taking their first steps as city councilors.