Matsuyama – A Slice of Old Japan

A word that is often associated with living in an expatriate community is transient, and for a long time I believed that word to have a slightly negative connotation. In the six years since I moved to Busan, I’ve accumulated about 800 Facebook friends, more than two-thirds of whom have since moved home or onward. Though it is sad that I will likely never see many of these people again, there are a fistful with whom I have not only secured lifelong friendships, but also established a solid travel network. One such person is Matthew Iannarone.

Matt moved to Busan just a few months after I did, and we fell into the same âfamily’. It was with Matt that I took my first jaunt to Southeast Asia, where, on the deck of a Ha Long Bay junk boat, he shared with me his dream of someday opening a bed and breakfast. After a two-year stint of teaching at Pukyong National University, Matt decided to fulfill another dreamâto hike the 88-temple pilgrimage in Shikoku, Japan. On that trip, he met Noriko Manabe, a hostel manager in Osaka, who shared his dream of opening a guest house. After an 18-month long-distance courtship, Matt moved to Japan in August 2010. Today, Matt and Nori are married and the proud owners of Sen Guesthouse in Matsuyama.

Sen Guesthouse is located within minutes of Dogo Onsen, the oldest hot spring resort in Japan; Matsuyama Castle, one of three remaining hilltop castles in Japan (and arguably the most beautiful); and Ishite Temple, number 51 on the pilgrimage. It’s a fantastic home base from which to experience a slice of âold’ Japan. Options for day trips are endless. In warmer months, Kashima Island is a perfect place for a beach picnic, a swim in crisp, clear water and encounters with wild miniature deer that inhabit the tiny island. The highlight, for me, was a trip to Uchiko, a rural village in which the city center (Yokaichi Old Town) looks as it did 100 years ago, complete with a full-scale kabuki theater. The Kosho-ji temple houses a massive sleeping Buddha and affords a beautiful vista overlooking the village and surrounding mountains.

Getting to Matsuyama from Busan involves a relatively quick and cheap flight to nearby Fukuoka, a bus or train to Kokura and then an overnight Ferry to Matsuyama (that’s about 100,000 won round-trip if booked online). Alternately, you can bike the Shimanami Kaido from Onomichi to Imabari. This is the longest series of suspension bridges in the world, which links Honshu (the main island province) with Shikoku. It takes about one full day and only costs 500 yen to rent a bike.

My five-day visit with Matt and Nori was one of the best trips I’ve taken in Asia. I’ve been to Japan three times before, and this was the first time I got a real sense of what makes our neighbors to the east tick. It helped that Sen Guesthouse is gorgeous, comfortable and incredibly affordable (2,700-4,500 yen, per person, per night). Both avid travelers themselves and veterans of the 88 temple pilgrimage, Matt and Nori are eager to share their vast knowledge of Shikoku with those who have made the effort to get off the beaten path.

For more info on Sen Guesthouse, visit their website at: www.senguesthouse-matsuyama.com 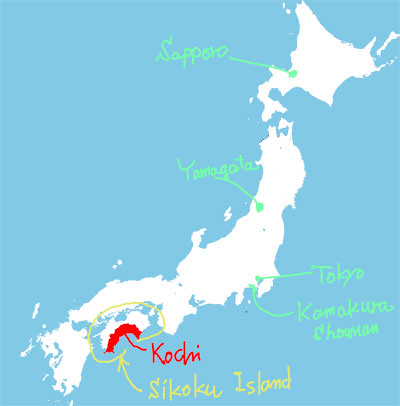 Small Luxury Hotels of the World (SLH) has released its annual Luxury Travel Trends Report, looking ahead at what will be shaping the luxury boutique experience in the coming year.
Read more
International Destinations

Ngapali is said to be the next top resort destination. With its turquoise blue waters and stunning sunsets, Myanmar’s most popular beach has a countryside vibe, a well-preserved culture, and attractions that cater to different kinds of travelers.
Read more
International Destinations

Nestled serenely on the island of Pulau Tiga 2.5 hours away by land and sea from Sabah's capital of Kota Kinabalu lies the plush Borneo Eagle Resort -- a cluster of 13 luxury contemporary villas opened in April 2018.
Read more
International Destinations